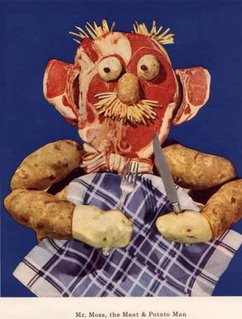 It's back to the basics time, Cafe 641. I think we all realize what's happened thus far for our Black and Gold. But, for a quick refresher, here goes:

1. We experienced Miracle Monday. Our lives were changed forever.

3. Our Saints lost 3 of the next 4 games. We experienced occasional flashbacks to almost every Saints team prior to this one.

4. Our Saints flamed the Falcons 31-13. WGNO-ABC's Adam Norris uses Chef lingo to introduce his Sunday night highlights: "The Saints dine on Falcon Wings with a side of Squeezed Quarterback. . . ." (Okay, Adam neither asked for permission nor did he fairly represent something Chef would actually say. It's Blackened Falcon with Dirtybird Rice, Adam!)

5. At 7-4, the Saints sit awfully close to division title and legitimate playoff run.

Okay, now consider how all this has affected our emotions up at the top of the Dome. We already are starved for oxygen in the Upper Terrace, the Dome Foam sells out faster here than anywhere else, and we regularly whip ourselves into frenzies over small 3-yard runs. I suspect we started to get a little demanding of our Black and Gold. Win. Win big. Win every game.

Hell, Chef himself painted his mustache gold and started monogramming his hat! If that ain't getting away from the basics, then I don't know what it is. Anytime Chef looks/sounds more like Terrell Owens or Chad Johnson than the meat-and-potatoes cook that he is, we have problems.

So it's back to the basics, Who Dats. Cafe 641 reopens on Sunday against the 49ers. We'll be serving Meat-and-Potatoes themed dishes. We're talking ground beef (Sourdough Sam Burgers?). We'll be dishing out one golden spoon to a fan from the Cafe who risked the ever-present Superdome security staff to rep his family. We'll be breaking good ol' fashioned Leidenheimer's french bread.

We'll be cooking up a NFC win.
Posted by Chef Who Dat 12 comments: 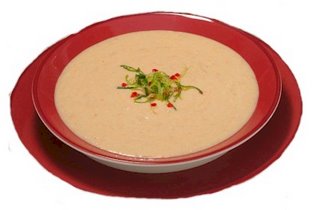 Game time 15 minutes away, and all Chef is looking for is a broken beak to top this tasty dish.

Not expecting any Steve Gleason magic this afternoon. Don't need any. Deuce for 100 yards. Joe for two touchdowns. And Fujita knocks down Vick more than once.

Good omens? Gris Gris? Emotional wins? Those are all nice. Especially in this beat-up city we call home.

But today is more about gut-check. More about lining up against the run. More about giving Deuce the ball 20+ times. More about good ol' fashioned Blackened Falcon with Dirty Bird Rice.
Posted by Chef Who Dat No comments:

Chef's the first to admit that the Cafe's "Here Kitty, Kitty" menu didn't slow down Ocho Cinco enough in the 4th quarter. Maybe that's because we had too much going on in Section 641. Maybe our menu overwhelmed even our red zone offense. Maybe Chef shoulda stopped at passing out menus. Maybe there was too much eye black. Maybe Bengal Bagels were too hard to digest. Maybe the connection between Cheetos and the Bengals was too vague. Maybe the Harley biker who threatened to kick Chef's ass after a friendly fire Cheetos strike weakened our morale.

It's hard to say, really. It all makes Chef want to find a nice quiet corner with a litter box and cover up the poo that was the Saints on Sunday against Cincinnati.

But Chef has a strong feeling -- call it kitchen karma -- that the Who Dats are comin' back strong against the Dirty Birds! We all know about the potency of our offense and the potential of our three-and-out defense. But we also have the FAITH of the Who Dat fans!

Need evidence? Here's some highlights from Sunday in the Dome:

Section 641, behind Row 43: Chef Who Dat welcomes Mr. Clio and Dillyberto to Cafe 641. The olive branch is extended from Who Dats in Section 635 to the Roofbangers in 641. Pandemonium erupts.

Section 641, Row 40: The Cat Burgular slips past security and nabs the prize of the game: the 641 banner that will be transformed into signage for Cafe 641 Who Dats for the remainder of the season.

Section 641, Rows 20-42: The "Here Kitty, Kitty" Menu, featuring culinary innovations such as the Mangled Bengal Burger and Hearts of Palmer salad, are snatched up by hungry Who Dats.
Posted by Chef Who Dat 3 comments: 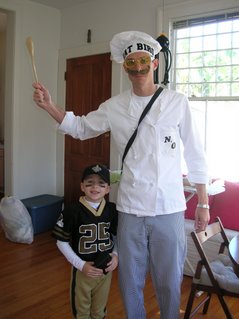 In a rare break from tradition, Chef is opening his call for Sunday menu suggestions to Who Dats with seats outside of Cafe 641. In preparation for a season-defining defensive display, a break-out game from Joe Horn, and 100 yards rushing from Saint Reggie, I'm working on a cat-themed menu.

Calling on all Who Dats to think outside the dome foam on this one. When you think Bengals, what culinary masterpieces come to mind? When I say "Houzmandazeh" what appetizer do you think of? If you were a cat, how would you like to be cooked?

Bring your best. Remember, Winning is an Attitude!
Posted by Chef Who Dat 3 comments: 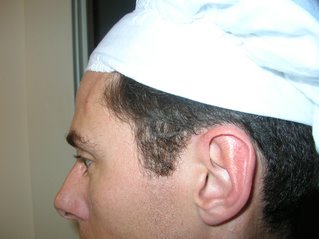 Chef’s response to John Carney’s miss from 32 yards out? See photo. A mild concussion after repeated strikes to the head with the same hand on which he wears his wedding band.

(To relive this moment along with Chef, think about your most frustrating moment from this afternoon’s nail-biter in Pittsburgh, then as hard/fast as you can, throw your hands up to your forehead in a “NOOOOOOOO!!!!!!” gesture. Be careful of hand jewelry.)

No complaints here on the Saints at 6-3. I’m not being too sunny cuz we ain’t happy in Café 641. And there’s still a chance for more head injuries later tonight when the reality of three turnovers fully sink in. Still, the Saints are 6-3. Take away three very real, very costly turnovers, and we’re 7-2. No matter what you do, we have a 1-game lead on the Filthy Falcons. And Chef eats bird like it’s candy.

Chef’s head wound already cleared for next Sunday against the Cincinnati Kittens. Get to the Upper Terrace and Section 641 early if you want to catch the Golden Spoon Award ceremony.

Chef’s got a busy week with a mid-week travel date to San Antonio, where I’ll be sure to piss in the Riverwalk and let the mayor know how much we appreciate his hospitality in 2005. Hey, S.A. . . . Cha-Ching!!!

Joe Horn: On the Virtues of Eye Black 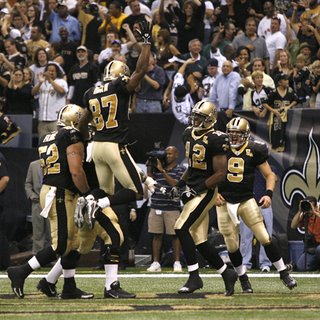 Already tired of the Joe Horn golf sightings and the "Reggie ain't what he's supposed to be" chatter . . . so I've personally moved on to far more important topics. Eye Black.

Because we're still another two months from getting back into our house and because lil' Reggie makes his first communion this year, we've been attending mass at St. Stephen's on Napoleon on Sunday mornings on away games. Even with all five of us, we ain't so obvious: the twins with matching grey/black Saints t-shirts; lil' Reggie in uniform; wife in "A Woman's Place is in the Dome" shirt; me . . . well I like to keep it incognito.

Still you'd think the priest, a loaner from Portland, Oregon, would give us a little Who Dat at the Sign of Peace. We got more love from the battered Eagles fans staggering out of the Dome a few weeks ago. Nevermind, we like to roll down the windows at the corner of Napoleon and St. Charles on the way home, and give a loud "Who Dat" to the Fat Harry's early crowd.
Posted by Chef Who Dat No comments: